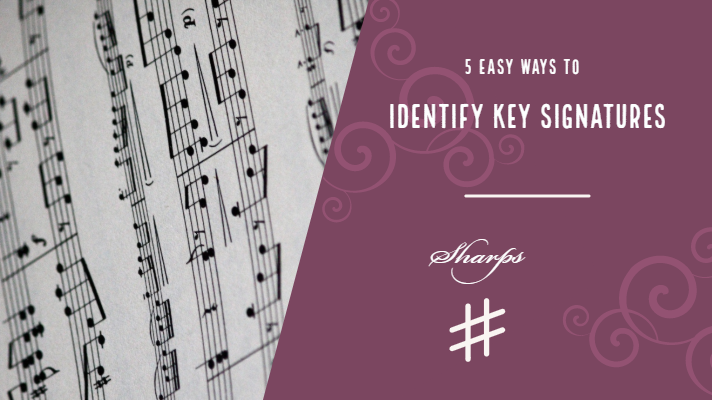 Any piece of music is written in key signatures. Key signatures are the arrangement of sharps or flats on lines and spaces on a musical staff to indicate that the corresponding notes are to be consistently raised (by sharps) or lowered (by flats) from their natural pitches.

The information discussed is relevant to the major key signature and not the minor keys. Finding key signature for flats use a different method

In this lesson, we will go over 5 easy ways to identify key signatures based on the number of the sharps.

Piano, Voice, and Songwriting students find it difficult to remember what key signature the music is written in. You will learn 5 easy ways to identify the key signature based on the number of sharps. I go over this in all lessons including online music lessons.

Remember, the Key of C has no flats and no sharps.

#1: Location of the sharp

For key signatures with sharps, the key signature is the note name one half-step above the last sharp. If you aren’t familiar with the notes on a staff, learn where “C” is on the staff and go up and down the alphabet.

If the note is F# the next note one half-step above F# is G. Therefore, the music is written in the key of G.

Sharps are added in order

Such that if the key has one sharp, that sharp will be “F”.

To remember this, you can use a mnemonic. A mnemonic, also known as a memory aid, is a tool that helps you remember an idea or phrase with a pattern of letters or numbers, or other associations. We can use the mnemonic, “Fat cats go down alleys eating birds.” The first letter of the mnemonic matches the order in which the note is added as sharps.

Keys of F# & C# are the only ones that have sharps in their names. The easiest way to remember this is “Free Candy.” We will discuss this later in the lesson.

#3: Number of strokes it takes to write the capitalized letter

#4: The letters of the alphabet

The 7 letters in a musical scale are the first 7 letters of the alphabet: A, B, C, D, E, F, G. If the last note that is sharp in the key is C. The next letter in the alphabet is D. Therefore, the music is written in D major.

#5: The notes on piano keys

You can use a piano keyboard to find the key. Similar to #1 and #4, you can look at the piano key and go up one half-step to find which key the music is written in.

The key of F# and C# are the only two that are written with the sharp as the key signature. This is because the location of the note below F and C (E and B) are whole steps and not half-steps. Raising it one half-step gives us E and C. Because there is already a key of E and C, and other music theory we won’t go into), we name these F# and C#

Key signatures help to identify the notes that are found in the major scale.

We used 5 easy ways to identify the key signature when it has sharps:

Watch the video for full review of information